Make your customers buy, what you want them to buy !!!


Don't blame yourself for being an impulse buyer, nor question your willpower for easily heeding  to those alluring advertisements that trick you into buying stuffs even when you don't need one. Needless to say, vendors with their marketing strategies, backed up by research,  know how to make you buy what they want you to buy. It's simple: marketing strategies bet on the fragile human psychology that is susceptive to manipulations; they win most of the time. Unless you are mindful of your actions, you are, in all likelihood, an easy victim. 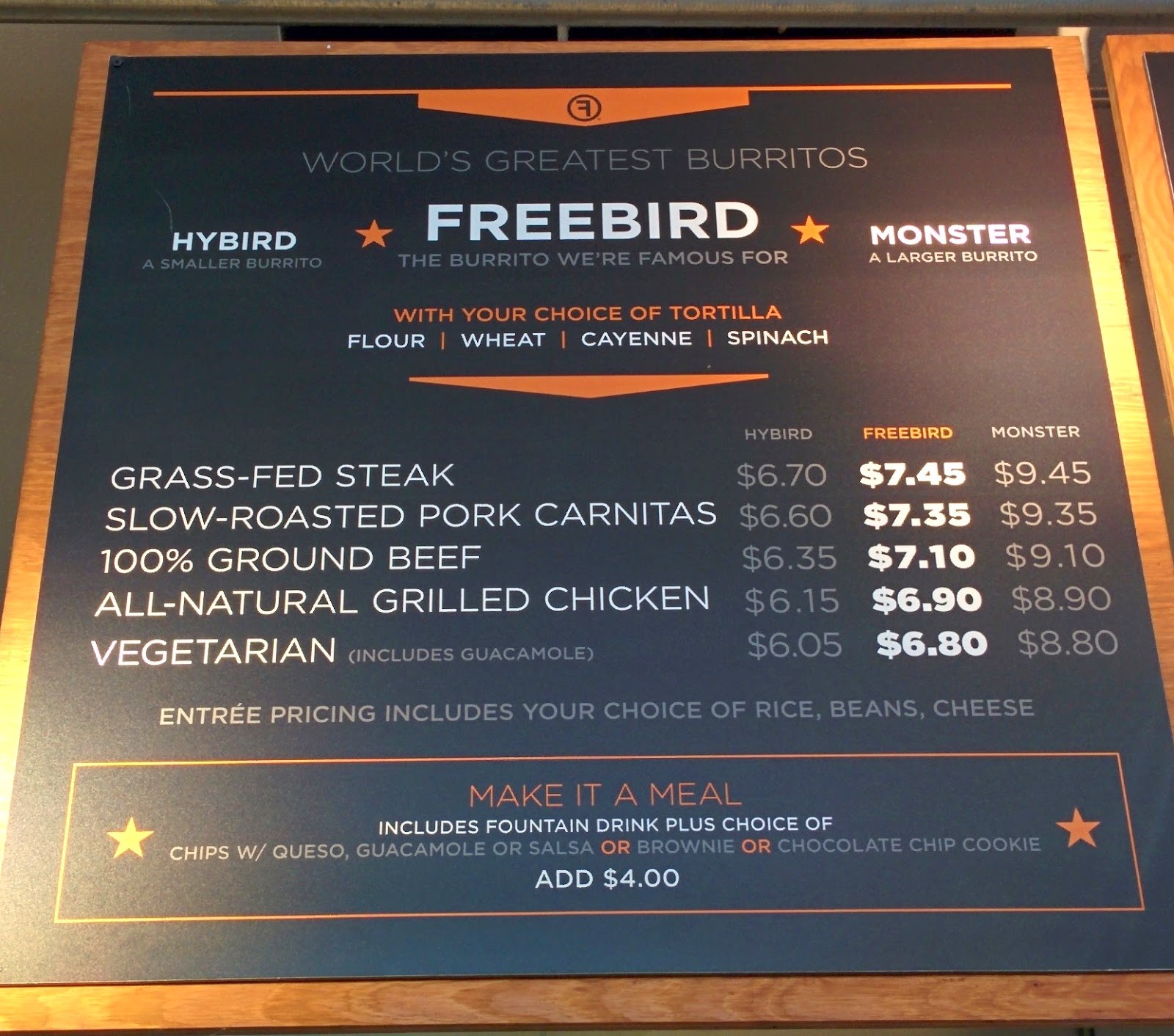 Enough of introduction, here is my recent experience at a fast food restaurant, which blinded me in into buying their preferred choice; all they did is, use colors intelligently in designing large display boards (menu) as the one shown here.

I was at Freebirds World Burrito, waiting for my friends to join me for lunch. While I waited, I had a look at the large menu-board placed at a relatively far distance. Freebird sells 3 variants of burritos; they are known for the "FREEBIRD" variant. Unless one is standing really close to this display board, except for "FREEBIRD" variant the other two are just out of your visual perception. It will never be a conflict of choices when choosing FREEBIRD variant, your mind fixates on it, because you can't really see the other two options. The same happened with me. Once my friends arrived, we proceeded to order, and to my surprise suddenly I see two other variants. Since I was already in the queue, it was too short a time to convince my brain into buying anything other than what it had already fixated on.

What just happened?
You just can't deny any of the credits to the designer who created this display board. This is an excellent illustration of playing with colors and aspects of Hue, Saturation, and Contrast to one's advantage. Let me explain the science behind this creation by making you familiar with two key color attributes: Saturation, and Contrast.

Saturation: Represents purity of the color, as its range varies from 0% (gray) to 100% (pure). For a given color, its various shades/vividness can be generated by just modifying the saturation. In the above image, the saturation value for the color of prices for Hybrid and Moster variants is set to low, and in addition, the background is black (that creates low contrast).

Contrast: Intuitively creates layering effects; it makes one element more apparent over the other. The best contrast effects are created be overlaying Warm Color on Cool Color, for example, Orange on Black, White on Black, and Yellow on Dark green, etc. In the above image, White and Orange colors are overlayed on black, creating the maximum contrast. Further, the color of prices for Hybrid and Monster variants are less saturated, and the black background significantly subsides the contrast.

Finally, this article isn't against vendors who play tricks on human perception and psychology to sell their products; rather, an illustration of how submissive, manipulative, and fragile the human psychology is.